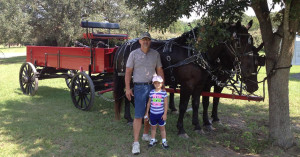 Daigle Farms is known as a working farm. He tends to his hay fields when he cuts and bails and often sells to the public. His laying chickens provide farm eggs and his ducks can be seen around the pond at any given time. He travels to the Amish country where he buys and sells the carriages and draft horses that you see around his farm. He handles the Amish rockers and side tables. He makes his blackberry and strawberry wine each year.
His Carriage House is used First and foremost for his St. Jude Children’s Hospital Fundraiser & Trail Ride always the first Weekend in December. (entry form attached) It is used for different events for those that help him with the St. Jude ride. He’s a member of the W & L Trail Riders that hold their meeting at the Carriage House, Christmas Party and many trail rides begin and end here.
He offers His Cinderella Carriage to carry the bride and her father to the church, he has the Glass Funeral Carriage when you lay your loved one to rest, the Hitch Wagon for parade events and the Covered Wagon for Mardi Gras Run & Trail Ride (entry form and rules attached) or any other trail ride. He’s got the Old Western Stage Coach also offered for parade events. There are many to choose from for all kinds of occasions.
The week long Western Heritage Trail Ride (entry form and rules attached) is at the beginning of the new year and leaves from Gueydan, LA, stopping to overnight in Lake Arthur, Jennings, Welsh, Iowa and on to Lake Charles. Keeping this event as true to the ole west as possible. They arrive for the grand entrance into the SW District Livestock and Rodeo.

Born Joseph Glenn Daigle, June 17, 1958. Glenn, as everyone calls him went to Welsh High School and was raised in Ardoin Cove.

He owned Glenn Daigle Construction for 16 years before he made the move into the food business in 1992 when he purchased Robideaux’s, now Rabideaux’s Sausage Kitchen, Inc. and has owned this business for 21 years. Glenn is the past president of the LA Little Britches. He was on the Board of the National Little Britches and was also a Finals Chairman of the National Little Britches in Colorado. He was on the advisory board of Jeff Davis Bank and Trust in Iowa, LA. He’s currently a Board Member of W & L Trail Riders.

He also has Daigle Farms with all types of activities from his hay fields, to working his draft horses and growing a garden. He offers carriage rides for several occasions including wedding, funerals, parades and any other events that he can work into his busy schedule. For the past 3 years on the first weekend in December he has held a Christmas Trail Ride to benefit St. Jude’s Children Research and Hospital, at the present raising $70,000.00. Currently he’s reorganized the Western Heritage Week Long Trail Ride from Gueydan to Lake Charles LA with the help of Blaine Crochet.

Always a busy schedule, but he wouldn’t have it any other way.
[/span4]

Daigle Farms is known as a working farm. He tends to his hay fields when he cuts and bails and often sells to the public. His read more...
Scroll to Top